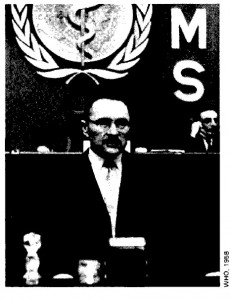 In 1958, a Soviet virologist proposed that all countries work together to end smallpox.  As this tribute notes, “no disease had ever been eradicated. No one knew if it could even be done.”

Smallpox is the only human disease to have been eradicated. Thanks to what Viktor Zhdanov started, efforts to end polio, malaria, and several other diseases are now underway.

During the Cuban Missile Crisis, a US warship began to fire warning shots at a Soviet submarine. Unfortunately, only the Americans knew it was a warning.

The submarine’s officers, out of radio contact with Moscow, assumed that war had begun and prepared to launch their nuclear weapon. It was only the second-in-command’s reasoned refusal that prevented “a cascade of destruction.”

Many years later, the director of the National Security Archive concluded: “The lesson from this is that a guy called Vasili Arkhipov saved the world.”

One of the lives Mr. Arkhipov probably saved was that of Ali Moaw Maalin, a cook in a Somali hospital. He also worked part-time as a smallpox vaccinator. Unbeknownst to his colleagues, he himself had declined to be vaccinated, for fear it would hurt. He thus earned his place in history as the last smallpox patient.

Upon being cured, he resolved to put his own experience to good use in polio eradication campaigns:

Now when I meet parents who refuse to give their children the polio vaccine, I tell them my story. I tell them how important these vaccines are. I tell them not to do something foolish like me.

In 2013, he succumbed to malaria while continuing Dr. Zhdanov’s magnificent endeavor.