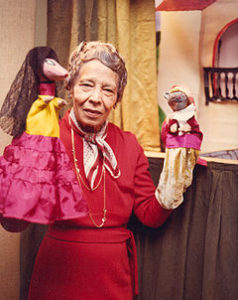 “Books transmit values. They explore our common humanity. What is the message when some children are not represented in these books?” – Walter Dean Myers

As this NPR tribute recounts, “Belpré could not find any books in Spanish – so she wrote them herself.”

Belpré travelled all over the city, from the Bronx to the Lower East Side, telling stories with puppets in Spanish and English. Nobody was doing that back then.

Today there is an award in her name, given each year by the American Library Association, to honor a Latino author.

The chances of winning this prize are, alas, not as slim as they should be: “the proportion of books for kids by Latino authors is so “shockingly low” that “it’s insane,” says the award official.

The problem is even larger. “Children’s and young adult literature… represent a stubbornly white world even as U.S. children are increasingly people of color,” Amy Rothchild concludes in FiveThirtyEight.